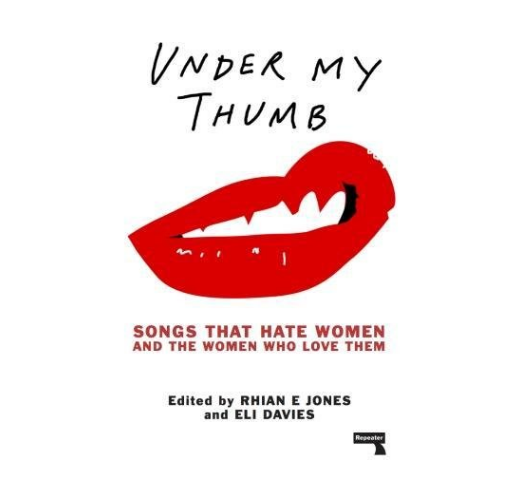 This essay appears in the book Under My Thumb: Songs That Hate Women and the Women Who Love Them, published by Repeater Books in October 2017

In April 2016, the hashtag ‘#indieamnesty’ hit Twitter, turning the spotlight on a genre that had last burned bright ten years ago. Too far removed to feel relevant – and too luridly memorable to claw back any real cachet – mid-2000s British indie had become the source of a very specific kind of humblebrag. ‘An ex-girlfriend cheated on me with a Zuton’ read one tweet. ‘Accidentally stood on Morrissey’s hand once’ read another. The tweets painted a picture of a long-gone world with Camden at its epicentre, when every band name began with ‘The’ and stylish boys wore waistcoats and thin ties.

Listening to mid-2000s indie today, it’s hard to remember exactly what all the fuss was about. For sure, the better acts have an energy and anarchy about them, a Myspace-era version of rock and roll. But the style as a whole has aged badly. If today’s more zeitgeist-friendly acts are marked by the absence of genre – pop blending into EDM blending into rap – then this music sounds very obviously of another time. For the most part, these are guitar bands, influenced by guitar bands, stemming from a purebred lineage of guitar bands. You don’t get them referencing Jamaican dancehall or sampling psychedelic folk. What’s more, through 2016’s blinkers, its demographic makeup is hard to overlook. Although there were, certainly, female indie acts, non-white indie acts and gay or bisexual indie acts (with Bloc Party’s frontman, Kele Okereke, perhaps unique in covering the latter two bases), these were the minority. Straight white male was the default.

In one sense, indie culture was egalitarian. The scene had many strands and multiple influences, with Riot Grrrl looming just as large as rock revivalism. It also allowed some blurring of gender boundaries. Fans of all genders opted for the same androgynous aesthetic – eyeliner, band T-shirts, skinny jeans  while raw emotionality was key to many of the songs. Just think of Frank Ferdinand’s breakup anthem, Walk Away, or the yearning Radio America by the Libertines.

At the outermost edges of the scene, where indie blurred into emo, acts like Placebo sung about queer culture and toyed with gender expectations. (Whether or not Placebo was truly ‘mid 2000s indie’ depends on where you draw the line). Still, there was a shaggy-haired elephant in the room, in that the scene was overwhelmingly male.

When I look back this era now, I struggle to recall many of the names I once spent hours searching for on Napster. They have fused into a single, homogenous mass of male grandstanding, male heartbreak, male bonding and – worst – male cod-profundity. But I do remember the Long Blondes, precisely because they were different. And while the likes of The Automatic have long since faded from view, The Kills are still going strong. It is the bands that deviated most from the ‘four white boys and a scratchy guitar’ template that sound the freshest to 2016 ears.

Youth culture is supposed to capture a spirit of rebellion. So why was this particular youth culture so in thrall to the status quo?

In 2005, the American writer Ariel Levy published Female Chauvinist Pigs, which discussed the rise of so-called ‘raunch culture’. As she saw it, women were doing things that would have outraged their mothers – getting breast implants, going to strip clubs, wearing T-shirts emblazoned with the Playboy bunny logo – all the while framing it as a postfeminist act of rebellion. According to Levy, these women were adopting two strategies to “deal with [their] femaleness”. Some were objectifying other women – reading Playboy, talking about porn stars – while others were objectifying themselves. In both cases, the ‘postfeminist’ justification seemed tenuous. Why would they bother aligning themselves with men, or performing sexiness to men, if men had truly stopped being the dominant cultural force?

It was around this time that the ‘Cool Girl’ trope began to gain traction. The Cool Girl was a young woman who, rather questionably, claimed to be different from all the other girls. Because she saw anything coded female as inferior, she took pride in distancing herself from her own gender and positioning herself as ‘one of the guys’. In Gillian Flynn’s 2012 thriller Gone Girl, the narrator describes Cool Girl as the ‘defining compliment’:

The Cool Girl, then, is a perfect conflation between Ariel Levy’s two categories of Female Chauvinist Pig. She distinguishes herself from girly girls, in a bid to attain the status of a guy. And she attempts to gain more social power on top of that by becoming an object of male desire.

To my 30-year-old self in 2016, the Cool Girl sounds like a textbook case of internalised misogyny. But to my 20-year-old self in 2006 – still trying to work out how to ‘deal with my femaleness’ – she was a paradigm to follow. She was a way to show the world that you were a full human being, rather than a reductive feminine stereotype, and she enabled you to do that while remaining attractive to boys

The Libertines’ first album, Up the Bracket, came out when I was 16. It’s still a great album. It’s the distillation of being in a dive bar – jumping about and splashing lager everywhere while you eye up a guy with sleeve tattoos. To many commentators, it marked the return to the UK of credible guitar music, which had dwindled into dirge-like irrelevance by the turn of the century.

Pete Doherty and Carl Barat, the Libertines’ frontmen, had swagger. They had many unsavoury qualities too, if you bought into their mythology, but the swagger was what carried the band. They were shambolic, they were wayward, they were exuberant; they owed more to post-punk than to Britpop. Nobody could have accused their music of being sanitised or watered down.

Of course, the very idea of being a rock and roll star is laden with gendered baggage, much of it too obvious to need unpicking. At the most reductionist level, it’s the men who are the creators and the sybarites; the women who are the muses and the groupies. This is not to say there has ever been a shortage of female-led or co-ed guitar bands. There’s a long and illustrious line of them. But the rock that informed the Libertines’ sound – and above all, the rock lore that informed their image crafting – overwhelmingly fits that basic template.

Take the song Boys in the Band, which many have taken to be about groupies (“And they all get them out / For the boys in the band”). At the very least, the song points to the magnetism of the male musician and the supposed servility of fandom. In the Libertines narrative, women were always somewhat beside the point, with Pete and Carl’s own homosocial bond forming the band’s emotional core.

Between 2003 and 2007, wave upon wave of British indie acts came to prominence – Frank Ferdinand, Editors, Razorlight, Kaiser Chiefs, Bloc Party, The Fratellis, The Kooks – some of which aspired to punk rock or art rock, some of which skewed middle-of-the-road.

By the end of this period, the genre was beginning its fatal slide into so-called ‘Landfill Indie’ – the result of lazy record labels throwing money at winning formulas. “The airwaves just became a dump that needed to be filled with product that looked a bit like other product that had done okay,” said Johnny Borrell, Razorlight’s frontman, in 2016.[1]

After that point, only the acts with a particularly distinctive sound, or scope to evolve, like the Arctic Monkeys, were able to survive. Indie mutated into nu-rave, which gave way to a synthpop revival. For a few years, however, indie music was the scene to be a part of if you were a disillusioned kid in an average British town.

A question I would ask my 20-year-old self is this: what do you do when the music you like consistently places women as remote, inaccessible objects of yearning? Or as resented girlfriends who are holding the narrator back? Or as sexual conduits to self-realisation? Perhaps you go along with it, aware that you don’t need to place yourself in an artist’s shoes in order to be a fan. Maybe you don’t see the subject matter as gendered at all, but view desire and claustrophobia and nihilism as universal themes. Or perhaps you see the songs as storytelling, pure and simple. More likely, however, you go into Cool Girl mode – deferring to a male world view, while secretly unsure where to place yourself.

I can’t speak for anybody but myself, but it’s clear that my Cool Girl phase – a rite of passage for many young women at that time – found a natural corollary in mid 2000s indie. The hallmark of a Cool Girl was that you ‘got it’. You didn’t moan about trivial things, like the fact that every single musician at your local indie night was a bloke, or that the lineup at every festival was 90% male, or that female artists within the scene could expect music journalists to focus predominantly on their looks. Your fandom was always going to be more complex than mere identification, but what could you do but perfect your eyeliner, debate the bassist’s shaggability, and try not to splash too much lager as you swayed about near the stage?

Over the last decade, a lot has changed. In broad-brush terms, as indie died, a wave of female solo artists swept in. And rather than being dismissed as ‘just pop’, they were taken somewhat seriously – the watershed moment arriving in 2011 when Beyonce headlined Glastonbury.

Without wanting to be too starry-eyed about it, I think the boom of ‘internet feminism’ has given young women more and better templates for how to see themselves. You can say what you like about Instagram and the like, but at least the girls posting #bodypos selfies or vlogging their diaries are defining their self-image on their own terms. I’ve not heard anyone claim to be ‘postfeminist’ in a while.

The internet has also, according to some schools of thought, negated the need for clearly defined youth subcultures. If you can tweak your identity to your heart’s content online, then why would you need an ‘IRL’ means to signal your preferences? Today’s 20-year-olds are image-crafting individualists, rather than a lumpen mass of scenesters.

As Alexis Petridis argued in the Guardian in 2014, “As with virtually every area of popular culture, [youth subcultures have] been radically altered by the advent of the internet… we now live in a world where teenagers are more interested in constructing an identity online than they are in making an outward show of their allegiances and interests.”[2]

Then there are all the ways that the music industry itself has mutated. If you can stream any artist you like, from any era or genre, within a few swipes of your phone, you’re probably not going to end up listening to exactly the same bands as everyone else in your halls at university. I don’t know what people are listening to in uni halls these days but I’d wager their tastes have grown more fragmented and more sophisticated, with the wormhole of ‘related artists’ on Spotify just as salient as whatever’s getting airplay on Radio 1.

Guitar music is bound to make a comeback. The music wheel always turns full circle, and #indieamnesty did point to a real depth of nostalgia for our ripped T-shirts and ridiculous haircuts. That said, there’s no going back to the more homogeneous, narrowly focused parts of that scene. By the time the kids start forming nu-indie bands, I am hopeful they will take the energy and the romance without the whitewashed, male-centric tedium that ultimately contributed to its demise.