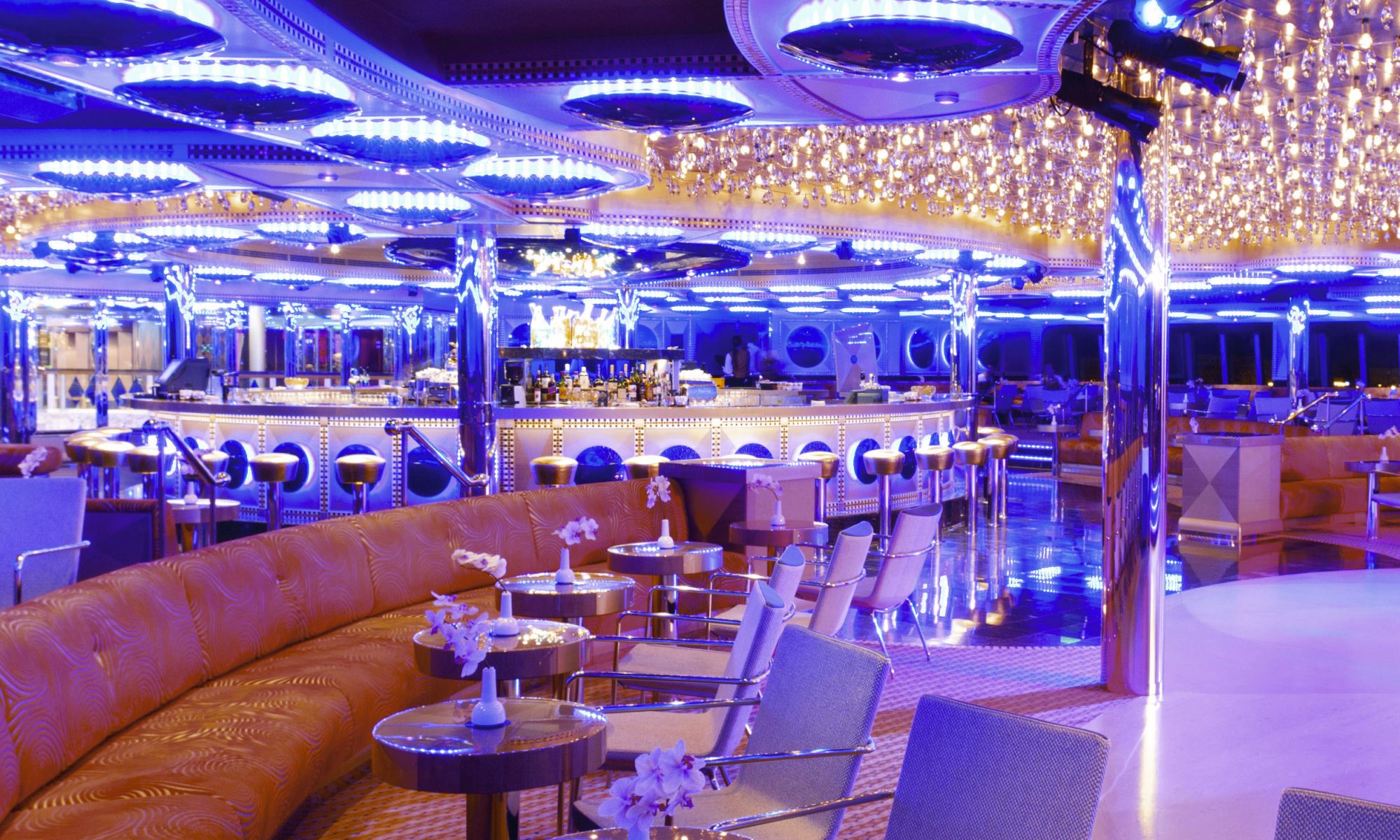 Many of today’s cruise ships boast ‘understated’ interiors, often in a bid to emulate the grand five-star liners of the past. But are they being timelessly elegant, or simply risk-averse? Costa Cruises’ Joseph Farcus and Princess Cruises’ Teresa Anderson explain how their own designs pay homage to the golden age of the cruise.

“I don’t believe in the term ‘understated’,” says Joseph Farcus, long-time interior architect for Carnival and now Costa. “To me, ‘understated’ shows a lack of design leadership. It’s safe because it takes no chances. It appeals to the supposed intellect rather than the emotions.”

Coming from anybody else, this admission might seem surprising. After all, understatement is often viewed as the very linchpin of good taste. Describe a design as understated, and you’re generally making a claim about its elegance, its supposed refinement and sense of class. Once you decry the very concept, you might as well be flying the flag for all that’s vulgar and brash.

And yet Farcus has made a career from designs that are definitely not toned down. Whether you love or hate his signature maximalism – the flamboyantly themed cruise ships, the Vegas-style ‘bling’ – you couldn’t accuse his designs of lacking leadership. Still less could you accuse them of pandering to cliché.

“It’s easy to tell people that lack of detail is understated and therefore fashionable,” he continues. “But when designers adhere to rules, they sell the public short.”

Farcus is striking back against a clear trend in cruise ship interior design. In recent years, the search for understatement has reached saturation point, with many ships taking pride in a more muted aesthetic. Gone is the heyday of in-your-face glitz, when your typical ship might flaunt eye-popping colour schemes and grandiose flourishes on every wall. Today’s operators are more likely to abide by the mantra ‘less is more’.

We only need think of Cunard’s fleet, with its clean lines and art deco touches. Then there’s Celebrity’s Solstice class, which is tastefully spacious, and Oceania Cruises, which opts for a country club feel. MSC Cruises trumpets its ‘all-Italian elegance’, and Norwegian Breakaway its sleek, contemporary feel. It’s a far cry from, say, the Carnival Fascination, which contains a Casablanca-themed café, a diamond-themed dance club, and a life-size Katharine Hepburn mannequin in the bar.

Reverence for the past

So why are so many interior architects now shying away from excess? Are they becoming more sophisticated in their approach – a welcome shift in an industry known for gaudiness – or, as Farcus would have it, are they simply playing it safe? What lies behind this ever-accelerating move towards subtlety and restraint?

One designer at the forefront of the scene is Teresa Anderson, vice-president of interior design at Princess Cruises. Having joined Princess in 1994, she has also worked on ships for Cunard, and is renowned for her traditionalist designs. Her most recent vessel, Royal Princess, set sail from Southampton, UK, in June this year, to great fanfare from cruise aficionados.

“My main consideration was to create spaces that are elegant and sophisticated, while maintaining the intimacy and richness our passengers have come to expect,” she says of the design. “I wanted to create a distinctive style; a balance of classicism and modernity.”

The architecture aims to go above and beyond the specifications of the Princess brand. The piazza atrium, for instance, is a Princess staple, but here it has doubled in size. The dining areas are richly theatrical, with a central chandelier and jewel-like floating spheres. Conversely, the staterooms are conceived as a haven, cosy as opposed to loud.

The ship is not exactly ‘understated’ – Anderson cares too much about entertaining her passengers to purge it of any sense of spectacle. But it is fairly gentle in its approach to innovation and reverence for the past.

“Generally, we try to achieve more relaxing and less overpowering designs,” she says. “Often I find this can be best served by looking for nostalgia, or indeed emulating the splendour and richness of the old liners but in a new way.”

Anderson’s designs for Cunard were exemplary in this regard. They paid obvious homage to the golden era of cruise ships – an age when cruising was glamorous, service was white-gloved, and a ship was the seafaring analogue of a grand five-star hotel. With its sculptural spiral staircases and echoes of Frank Lloyd Wright, Royal Princess doesn’t stray too far from this template.

“Those elegant liners are never far from the mind and imagination when addressing the challenges of today,” says Anderson. “Though passenger expectations may have changed, human nature is still the same, and the experience of being transported into a luxurious environment is uplifting to mind, body and spirit. It is this experience we try to recapture. We want to incorporate the best of the past with the possibilities of the present.”

Paradoxically enough, channelling the past requires some technological know-how. The old-style ocean liners owed their grandeur to their use of space: clutter was kept to a minimum, and wide-open areas prevailed. On Princess ships, the public areas are equally unstructured, taking advantage of technical improvements to achieve dramatic spatial voids.

Similarly, the old liners made use of bountiful luxury materials. While many such materials are no longer permitted, their appearance can be emulated through modern shipbuilding techniques. Anderson favours wood marquetry, sandblasted glass panels, leaded glass ceilings, decorative lighting and hand-laid marble floors.

“In the future, technological advances in materials may to some degree be negated by the tightening of regulations on safety and security on board,” she points out. “This is a positive development, and I anticipate that cruise ship designs will respond with creative and innovative solutions, making the cruise ship vacation safer and even more enjoyable.”

So can we associate the vogue for understatement with sheer nostalgia, a move away from orchestrated excess to the relative simplicity of a bygone era? It’s tempting to think so, especially in the wake of the financial crisis – after all, the so-called age of austerity is hardly amenable to glitz. Farcus, however, doesn’t have much patience for this spin.

“It’s not disingenuous; it’s just wrong,” he remarks. “I am an enthusiast when it comes to the old liners. They, or at least the most famous ones, were ships of state, which carried the pride of the nation’s flag on her stern. The various lines tried to outdo themselves in luxury, design and, in most cases, opulence. I think this is the opposite of the trend you refer to.”

As he sees it, the financial crisis has not so much encouraged traditionalism as stymied creativity. With little scope for failure, management has tended to get increasingly involved with the interior design, culminating in what he describes as a “vision inspired by accountants”.

“In my opinion, the restraint is fear of failure,” he says. “Money is tight and owners don’t want to take perceived chances. This way of thinking reduces personality of design to a uniformity, which in our world today will not be a long-term winning plan.”

He believes that, above all, it’s important to keep ship design challenging and unique. Since starting at Carnival in 1975, he has headed up the interiors of over 40 ships, and each has boasted a different theme. Far from simply aping a Vegas resort, he casts a wide net, jamming together influences from classical Roman architecture to old Hollywood by way of high-Renaissance art.

“By the way, the opposite of understated is not brash,” he says. “Design should always be appealing to the intellect, but by way of fascination rather than by an accepted term like ‘understated’. I believe in artistic creation that appeals to the intellect in the highest sense and to the emotions for the enjoyment of life.”

Perhaps the real contrast here is not between classicalism and flamboyance but between creativity and caution; willingness to experiment versus managerial constraints. If we frame the dichotomy this way, Anderson and Farcus both come out on the same side of the debate.

“Current trends in cruise ship interior design tend to be brand-specific,” points out Anderson. “Most cruise companies tend to stay within the parameters of their brand identities, to a greater or lesser degree. This is driven to some extent by the demographic of their passenger base.”

Nor is it quite right to think of European glamour at odds with all-American excess. While undeniably American, Farcus is indebted to the quixotic Catalan architect Antoni Gaudí, and his latest work for Costa Cruises has an Italian feel.

The challenge, rather, for all designers is to create a ship that sweeps its passengers away from their day-to-day existence, placing them within a self-contained world. For many cruise lines, this does indeed imply something quiet: Anderson speaks of “calming spaces” that counteract our “frenetic pace of change”. Still, that doesn’t mean slipping into bland homogeneity. The old luxury liners left room for both tranquillity and theatrics.

“Bling has not died, I can assure you,” says Farcus. “I think it would be most sad and distressing if the design world in the leisure industry became Orwellian and was based upon rationale and forced and perceived taste. It’s not what most people are looking for when they fantasise about a holiday or cruise.”

“My love of linearity along with the refinement of motifs helps me to create a vision of luxury,” says Anderson. “I ultimately hope to exceed expectations, so that our passengers are continually surprised.”